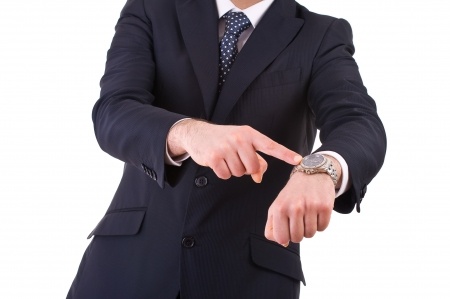 The problem with using “standard” phrases is that while the courts have conferred upon them certain import, their overuse sometimes renders them meaningless.  If you use a “standard” clause understand its implications and give thought to what you’re trying to accomplish.

“TIME IS OF THE ESSENCE”

One example of such a standard phrase is “Time is of the essence.”  You’ll find this clause in many business contracts. In discussions with numerous buyers and sellers, I find that many don’t understand its legal significance.

In this article, I will discuss the interpretation and reason for the use of Time is of the essence in non-goods contracts and contracts for the sale of goods. Its use can be important in a contract. Just make sure you understand its purpose, use it for that purpose and specifically state your remedies if the time of performance is not met.

The general rule in contract law dealing with non-goods is that a party may cancel the contract if the other party is in material breach of the contract.

When it comes to non-goods contracts — for example, services, development, construction, real estate, loans — courts often don’t consider on time performance to be “material”. The general rule is that time is not of the essence unless the contract expressly so provides. While the buyer may be entitled to damages as a result of a “partial breach”, the buyer may not cancel the contract.

For that reason, lawyers began to use “time is of the essence” provisions in contracts. When a buyer wants to make sure that performance is completed on time, the contract will include a clause that specifically states: “Time is of the essence with respect to deliveries under this Agreement.” This clause changes the remedies available to the buyer. If the supplier fails to deliver on time in this situation, the buyer would have the right to terminate the contract immediately without notice and claim damages.

WILL “TIME IS OF THE ESSENCE” PROVISIONS BE ENFORCED?   MAYBE

The modern view held by most courts is that a party’s failure to meet the conditions of a “time is of the essence” provision amounts to a material breach of the contract. And, alternatively, most courts will not consider the timing to be crucial if this language is left out.

THE DANGER OF USING A “STANDARD” PHRASE

However, when a contract uses the overly broad phrase “Time is of the essence of this Agreement” without being specific to the specific performance that is critical (as many contracts do), courts might consider this clause to be too vague since: “A contract may contain many promises for sundry performances, varying in amount and importance. A general provision that ‘time is of the essence’ should not apply to all of the promises for performance.” 8-37 Corbin on Contracts § 37.3.

And even if it happens to be clear what particular performance the phrase applies to, the phrase is silent as to the exact consequences of untimely performance.

So, it’s not surprising that courts have been willing to ignore “time is of the essence” clauses on the grounds that you can’t assume that the parties to a contract understood and agreed on the perceived meaning of the phrase.

AGAIN: SAY WHAT YOU MEAN AND STATE THE CONSEQUENCES

In other words, if a buyer considers on time performance/ delivery to be essential to the deal, the buyer should expressly state that in the contract.

However, the parties should also discuss and agree upon alternate remedies and back up plans. During contract negotiations, the buyer will generally expect the right to terminate if the seller is late. In reality, when the time comes, many buyers won’t exercise that right. From a practical perspective, the buyer’s accepting later performance often makes more sense than termination simply because of the cost and time impact in contracting with an alternate supplier.

Alternate forms of remedies should be considered such as: reduced price, no-charge extensions of maintenance, and credits against future purchases, all of which are forms of “liquidated damages”.